1991 Coleman Williamsburg - I found it in the back yard of a friend of a friend, having sat unattended for about 2 years.  I saw the potential in this, so inquired if it was for sale. It was! So, I bought it in June of 2003. It did need a little work, as it hadn't been touched in those years.

So home with me it went!

After getting it home, I opened it up, and began the big job of cleaning.

The Son of a Son of a Trailer™ is named (loosely)

after Jimmy Buffet's album "A Son of a Son of a Sailor" as we are a bunch of Parrotheads - it seemed right at the time.

Shortly after the purchase, in September of 2003, while at the Big "E" fair in Springfield, MA, I found a vendor that made vinyl letters. So after about an 1/2 hour of design thinking, I had him cut the "Son of a Son of a Trailer™" letters that now adorn the rear panel.

So that is the story of the "Son of a Son of a Trailer™"! Feel free to check out the rest of the website for its trips, my reviews and other items, which (in theory) get updated after each trip.

On October 22nd, 2017, a large storm came through the area. This was not terribly unusual, large storms have happened before and usually everything comes through unscathed... but not this time.

It greatly saddens me to report that a large tree fell on top of the Son of a Son of a Trailer™, damaging it greatly. The possibility of it not being able to be fixed is pretty good. So thus, our story draws to a close. In the meantime, I will work on a page with the full story including the pictures that were taken. Stay tuned...

I will always have the stories, the memories and my fond recollections of the times I have had - Son of a Son of a Trailer™, you will be missed. 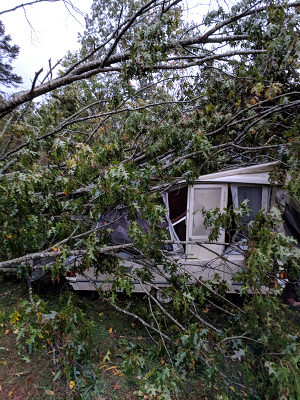 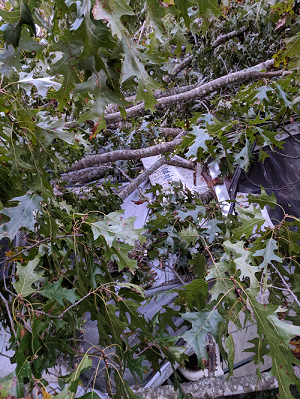 UPDATE: While the insurance paid for the trailer, it was nowhere near enough to replace it. The remains of the trailer, upon request, were given to a neighbor who took the body off and re-purposed it as a flat hauling trailer - the underlying frame was fine. So, the Son of a Son of a Trailer lives on, in a fashion. We wish it the best in its new life.